Definitions and meanings of "Allophonic"

What do we mean by allophonic?

In Quebec, an allophone is someone whose first language or language of use is neither English nor French. The term is also sometimes used in other parts of Canada. It is formed from the Greek roots allos, meaning other, and phone, meaning sound or voice. Compare the terms anglophone and francophone, which designate people whose first or adoptive languages are English and French, respectively. One is said to be an allophone if he or she speaks neither french nor english at home with the family or "on the phone".  Urban Dictionary

The word "allophonic" in example sentences

These allophonic realisations varying by dialect would have resulted in the variety of realisations in daughter languages.   ❋ Unknown (2009)

Aren't you precisely ascribing allophonic shwa devoicing as the cause of sibilant insertion?   ❋ Unknown (2009)

If *kap is actually reconstructible as *qap - you guys would know if this is the case - this might be a simple case of allophonic variation entering into the equation.   ❋ Unknown (2009)

"Aren't you precisely ascribing allophonic shwa devoicing as the cause of sibilant insertion?"   ❋ Unknown (2009)

Granted, allophonic preaspiration is not quite normal either and were it phonemic, it would not be any less of an assumption than a phonemic *ts or *st would, I'm only bringing this possibility up to point that *ts and *st are not the only viable options here.   ❋ Unknown (2009)

On the other hand, it's of course ideal, if it is the same particle, that we see alternation between velar and uvular, since it would be proof for allophonic distribution.   ❋ Unknown (2008)

Take an Iranic form such as *seftem; allophonic palatalization before *e is likely there considering its effects on Aryan velars.   ❋ Unknown (2008)

Alternately, if your normal/supershort shwa distinction is not supposed to be allophonic, I'd also be very interested in seeing an example of a language distinguishing length only in reduced vowels.   ❋ Unknown (2008)

They were, as I stated before, initially produced by allophonic differences dependent on the neighbouring vowel.   ❋ Unknown (2008)

If I'm not mistaken, this initially allophonic labial colouring of *e by *h₃ had started before the dissolution of the PIE speech community.   ❋ Unknown (2008)

However, in a language that lacks a phonemic contrast between "o" and "u", it would be natural for there to be allophonic, dialectal or idiosyncratic variation within that large vocalic space.   ❋ Unknown (2008)

So far, I'm thinking that gemination was merely an allophonic variation of non-geminated phonemes.   ❋ Unknown (2008)

This would point to an allophonic variation of an original **x before non-low and low vowels, respectively.   ❋ Unknown (2008)

Tropylium: "Alternately, if your normal/supershort shwa distinction is not supposed to be allophonic, I'd also be very interested in seeing an example of a language distinguishing length only in reduced vowels."   ❋ Unknown (2008)

For example, in Proto-Indo-European, we write word forms phonemically, such as *édti 'he eats', and then any environment-conditioned allophonic variation is expected to be understood, such as the rule that two adjacent dental stops in PIE such as in this example were pronounced with intervening sibilant automatically.   ❋ Unknown (2008)

As for the idea of long vowels being allophonic with short vowels, I doubt you'll find a clear explanation from others but it's something that I believe as well.   ❋ Unknown (2007)

I also find it interesting that, after I've suggested that uvularity was a rather recent distinct feature only developping from earlier allophonic variation once Syncope began in early Late IE, Lass' comments on phonemic typology appear to be quite apt: "Remembering that these are phonemic - not phonetic - 'normalcy statements', we can be justified in suspecting that, for instance, if a language has a pharyngeal fricative or uvular stop phonetically, it is more likely than not to be better characterized as an allophone of something else than a primary allophone."   ❋ Unknown (2008)

The number of allophones in Quebec has increased in recent years. Most are immigrants from Asia, Europe, and Africa. ❋ G.H. Hadden (2005)

What does allophonic mean? 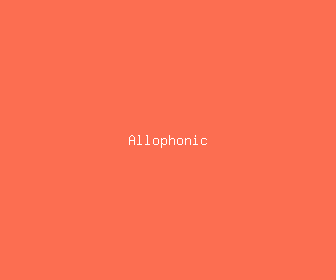 Let my skin and sinews and bones dry up, together with all the flesh and blood of my body! I welcome it! But I will not move from this spot until I have attained the supreme and final wisdom. Buddha