Definitions and meanings of "Bicentenary"

What do we mean by bicentenary?

That which consists of or comprehends two hundred (commonly the space of two hundred years). noun

The 200th anniversary (or the celebration of it) noun

The word "bicentenary" in example sentences

Instead, as Bright's bicentenary was marked on Wednesday, it has fallen to Eurosceptic Tory Bill Cash to celebrate the great man through a new biography. ❋ Unknown (2011)

Outside the prefabricated hut that serves as his makeshift office stand crates containing those treasured bottles of soy sauce, including one from a limited edition to mark the firm's bicentenary in 2007. ❋ Unknown (2011)

This year, which sees significant milestones for both Schumann (his bicentenary) and Hugo Wolf (the 150th anniversary of his birth), is a natural focus for a festival whose raison d'être is a celebration of 19th-century song, and both composers dominate the fortnight of recitals. ❋ Andrew Clements (2010)

Brigitte Lacombe/Metropolitan Opera Gary Lehman in 'Siegfried' The Liszt List The year 2011 marks the bicentenary of the birth of Franz Liszt, one of the 19th-century's most influential figures. ❋ John Jurgensen (2011)

Liszt has certainly been one of those specialisms, and in the composer's bicentenary year Noseda is conducting his most ambitious orchestral work, A Faust Symphony, alongside Liszt's fellow Hungarian Bartók and his final, unfinished score, his Viola Concerto. ❋ Unknown (2011)

Is to celebrate the bicentenary of the birth of louis Braille (1809-1852) french inventor of this alphabet for the blind people over the world. ❋ Azmie Aka Switch Image (2009)

No company played as important a part in the spread and popularisation of music in this country than the one whose bicentenary is being celebrated at London's South Bank on Tuesday night. ❋ Unknown (2011)

The British Council programme, marking the bicentenary of Dickens' birth, which falls on 7 February 2012, will include film, performance, talks and debates in countries from Azerbaijan to Zimbabwe. ❋ Unknown (2011)

The biggest challenge of all, Götterdämmerung, follows next year, and, all being well, there will be complete cycles in 2013, the bicentenary of Wagner's birth. ❋ Unknown (2011)

It was resubmitted, with the ingeniously coined description "landscape laboratory" in 2009 to mark the bicentenary of Darwin's birth, but still failed to make the cut. ❋ Unknown (2011)

These two books are the first outriders of an impending cavalry charge of Dickensiana, booked to celebrate next February's bicentenary of his birth in 1812. ❋ D.J. Taylor (2011)

As Dickens's birthplace, the city was a focus for the bicentenary celebrations last week – but outsiders have not always warmed to it. ❋ Unknown (2012)

This year there's an updating of Handel's Saul by Olivia Fuchs; Donizetti's opera seria Maria di Rohan, directed by Stephen Medcalf with Mary Plazas in the title role; and – to mark the bicentenary of the birth of Ambroise Thomas – a rare staging of his most celebrated opera Mignon, conducted by the festival's artistic director Andrew Greenwood. ❋ Unknown (2011)

Their goal is a complete Ring cycle in 2013, the composer's bicentenary year. ❋ Unknown (2011)

There is still a sizeable chunk of the world which sees the English as top-hatted toffs who can be cruel to their urchins, so it remains to be seen what they will think after the British Council's celebrations of Charles Dickens' bicentenary. ❋ Unknown (2011)

The bicentenary of the three-year conflict between the United States and Britain, now upon us, has finally begun to inspire historians to shed more light on it. ❋ John B. Hattendorf (2012)

We celebrate today the bicentenary of the original opportunity, 20 July 1810. ❋ Unknown (2010)

If you're a glutton for Dickens and you'll need to be, with the BBC already stuffing its schedules with the forthcoming bicentenary of his birth, jolly spoofery abounds in The Bleak Old Shop of Stuff, which features Robert Webb as an upstanding Victorian retailer of nonsense items thrown into sudden penury by bewhiskered evil Stephen Fry in a stovepipe hat. ❋ Unknown (2011)

The timing is perfect: This year marks the bicentenary of the birth of its architect, Sir George Gilbert Scott 1811-1878, who will be commemorated with a special service at Westminster Abbey on Wednesday—a rare honor for an architect. ❋ Colin Amery (2011)

Ian McMillan's welcome reminder of Edward Lear's imminent bicentenary did not mention that Lear "is perhaps the greatest draughtsman of birds in European culture", in the words of Philip Hofer, of Harvard's Houghton Library There was a lad called Lear, 28 December. ❋ Unknown (2012)

What does bicentenary mean? 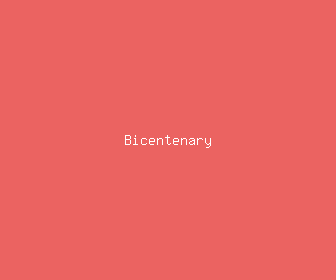 Do you want to know who you are? Don't ask. Act! Action will delineate and define you. Thomas Jefferson