A presentation of statistical data in geographical distribution on a map. noun

A map showing geographically, by shades or curves, statistics of various kinds; a statistical map. noun

Generally, a map used to indicate geographically-bound statistical information, typically region-by-region values of a given variable, for example by using different shadings for different ranges of values. noun

The word "Cartogram" in example sentences

Which is why I like the "cartogram" style maps that show size by population instead of by square miles. rochesterturning.com

Mark Newman was up through the night of the 4th cranking out fresh versions of his now-famous linearly-coloured and cartogram maps of the election results. hughstimson.org » Blog Archive » Plus Ca Change

The closest terms are cartogram (a map showing statistics geographically) - from the French carte and gramme; cartographer (one that makes maps), and cartography (the science or art of making maps) again referencing the french word carte card, map + graphie - more at CARD. Archive 2008-02-01

The bottom map is a population cartogram, more representative of the population in each state. June 2006

The bottom map is a population cartogram, more representative of the population in each state. Do You Write Red or Blue State Books?

Watching the cartogram pulse as it indicates the proportional volume and sentiment of tweets is probably more interesting than the researchers 'conclusions about their data: people are happier on weekends than weekdays; West Coast happiness trends are usually about three hours after East Coast happiness trends. Original Signal - The best of Web 2.0

Others take one side of the geographic/cartogram divide: Planet Geospatial

Here is what the cartogram looks like for the county-level election returns: GISuser - GIS and Geospatial Technology News

The cartogram was made using the diffusion method of Gastner and Newman, which is described in detail in GISuser - GIS and Geospatial Technology News

What does cartogram mean? 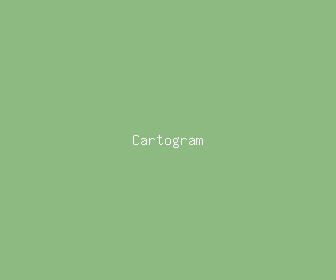 Listen to what you know instead of what you fear. (Richard Bach )