Definitions and meanings of "Conglutinate"

What do we mean by Conglutinate?

To become or cause to become stuck or glued together. intransitive & transitive verb

To become or cause to become reunited, as bones or tissues. intransitive & transitive verb

Relating to the abnormal adhering of tissues to one another. adjective

To glue together; unite by some glutinous or tenacious substance; reunite by adhesion; cement.

To adhere; coalesce; become united by the intervention of some glutinous substance.

Glued together; specifically, in botany, united by some adhesive substance, but not organically united: as, con-glutinate organs.

Glued together; united, as by some adhesive substance. adjective

To glue together; to unite by some glutinous or tenacious substance; to cause to adhere or to grow together. transitive verb

To unite by the intervention of some glutinous substance; to coalesce. intransitive verb

To stick or glue together verb

To join together, to unite verb

Cause to adhere verb

The word "conglutinate" in example sentences

The argument and the language in this sentence are pretty nearly on a par; for as misery makes men acquainted with dissimilar companions, why may not parsimony conglutinate heterogeneous compositions? Notes and Queries, Number 71, March 8, 1851 A Medium of Inter-communication for Literary Men, Artists, Antiquaries, Genealogists, etc.

_ You must drink your wine pure; and to thicken your blood, which is too thin, you must eat good fat beef, good fat pork, good Dutch cheese, some gruel, rice puddings, chestnuts, and thin cakes, [5] to make all adhere and conglutinate. Le Malade Imaginaire. English

Words that are triggered by (strongly associated with) the word conglutinate:
resembles
fish 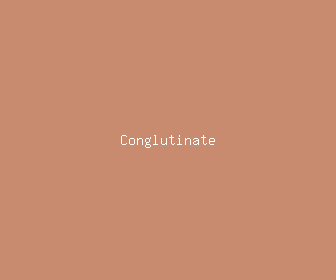 True friendship is a plant of slow growth, and must undergo and withstand the shocks of adversity, before it is entitled to the appellation. George Washington