Definitions and meanings of "Cooees"

What do we mean by cooees?

A long, loud call used to attract attention when at a distance, mainly done in the Australian bush.

(with "within") A short distance; hailing distance.

Cooee! (IPA /ku:'i:/) is a shout used in Australia, usually in the bush, to attract attention, find missing people, or indicate one's own location. When done correctly—loudly and shrilly—a call of "cooee" can carry over a considerable distance. The distance one's cooee call travels can be a matter of competitive pride. It is also known as a call of help, which can blend in with different natural sounds in the bush.  Urban Dictionary

The word "cooees" in example sentences

The fourth day is notable for the indisposition of Bodenham, who is a bad walker, and, falling behind, delays the party by frequent cooees. ❋ Unknown (2004)

As each vessel came abreast, wild, enraptured cheering broke out, and, with all the power of healthy lungs, with enthusiasm unreserved, with cooees and hakas and scrappy messages semaphored by the arms, the Australians and New Zealanders met in a deep friendship which was to last through years of campaigning and privation. ❋ Unknown (1930)

All the party are now scattered, and after while reassemble by dint of continuous "cooees." ❋ Unknown (1867)

We heard some subdued cooees, not very far from our camp, which I thought might originate from natives returning late from their excursions, and whose attention had been attracted by our fires. ❋ Ludwig Leichhardt (1830)

We were much afraid that his cooees would bring the whole tribe to his assistance, and every one eagerly proffered his advice. ❋ Ludwig Leichhardt (1830)

We saw their numerous tracks, and a footpath leading to the river; and heard their cooees round our present camp, which may have interfered with one of their camping places. ❋ Ludwig Leichhardt (1830)

In riding along we heard the cooees of natives, and passed several large camping places near the large water-holes of the creek. ❋ Ludwig Leichhardt (1830)

Very early in the morning we heard the cooees of the natiyes, who seemed wailing, as if one of their number was either killed or severely wounded: for we found stains of blood on their tracks. ❋ Ludwig Leichhardt (1830)

Upon reaching the place of our next camp, Mr. Roper went to cut tent-poles, but, perhaps too intent on finding good ones, unfortunately lost his way, and wandered about the bush for about five miles before we were able to make him hear our cooees. ❋ Ludwig Leichhardt (1830)

I should have been inclined to consider it a hoax, had I not heard their distant cooees as late as 9 o'clock, when I silenced them by the discharge of a gun. ❋ Ludwig Leichhardt (1830)

Here we heard the distant cooees of natives, which we answered, going in their direction, until we came to a camp, in which we found an old lame man, "Baki Baki," and a short sturdy fellow, "Rambo ❋ Ludwig Leichhardt (1830)

Need synonyms for cooees? Here's a list of similar words from our thesaurus that you can use instead. Trying to find another word for cooees in English? Our thesaurus contains synonyms of cooees in 7 different contexts. We have listed all the similar and related words for cooees alphabetically.

Adjectives that are often used to describe cooees:
wild
continuous 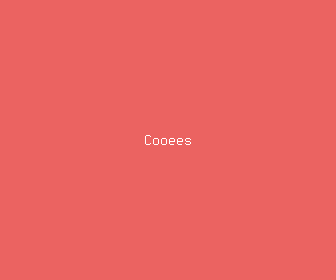 Don't judge each day by the harvest you reap but by the seeds that you plant. Robert Louis Stevenson