Definitions and meanings of "Cuttingly"

What do we mean by cuttingly?

The word "cuttingly" in example sentences

In debates with Barack Obama, he would have been as cuttingly effective as he was in his encounters with Joe Lieberman and John Edwards in 2000 and 2004 respectively. ❋ Unknown (2009)

She says, indirectly but no less cuttingly, that "Mrs. Nixon is not someone I wish I could have had to dinner." ❋ Frank Gannon (2011)

Was it to "impress chicks," as one editor cuttingly suggested? ❋ Gautam Naik (2010)

All three of his colleagues are impressive, but it is the snide, cuttingly nasal voice of Mr. Rhys that will echo in your mind long after you leave the theater. ❋ Terry Teachout (2012)

"Just like one of the ancient dictators," she was saying cuttingly. ❋ Johnny Pez (2010)

More cuttingly, it suggested the relationship between the U.S. and Israel did not result from some deep overlap of strategic assets, but from a powerful domestic lobby in the United States that drove American policy along a trajectory divorced from real U.S. national interests, a lobby that also stifled opposing voices. ❋ Gregory Levey (2010)

Bone idle, the racing writer had once written a cuttingly satirical eye-witness 'account of a much looked forward to parade of champions that had in fact been cancelled by heavy rain. ❋ Allie Dresser (2010)

Early in the Democratic primaries, in January 2008, Obama had stunned many of his supporters by praising Reagan as a transformational president — a contrast to the eight years of Bill Clinton, Obama added cuttingly. ❋ Unknown (2010)

The Washington Times cuttingly explains why Obama has produced the ‘worst foreign policy ever’: ❋ Unknown (2009)

It dismisses Mccain's attacks as the "politics of the past," "the low road," and, most cuttingly, the "same old politics," thus simultaneously rising above the fray, dismissing McCain's attacks without engaging them, and amplifying the Obama change message. ❋ Unknown (2009)

What does cuttingly mean? 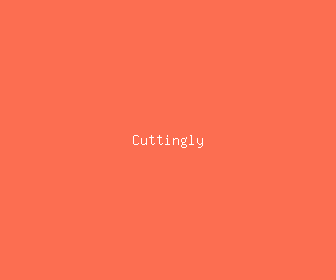 By three methods we may learn wisdom: First, by reflection, which is noblest; Second, by imitation, which is easiest; and third by experience, which is the bitterest. Confucius