The word "Flocculi" in example sentences

In some, the nebulous matter of which they are composed can be seen like masses of tufted flocculi, sometimes piled up, and at other times promiscuously scattered, resembling in appearance the foam on the crested billows of a surging ocean rendered suddenly motionless, or cirro-cumuli floating in The Astronomy of Milton's 'Paradise Lost'

But these streams ought to be free from contamination by sewage matter, or any drainage which might convey the germs of fever, or other blood poison: for, as we are admonished, the Water-cress plant acts as a brush in impure running brooks to detain around its stalks and leaves any dirty disease-bringing flocculi. Herbal Simples Approved for Modern Uses of Cure

A stone in the bladder occasions very similar symptoms, together with pain in the peritoneum and pubes, dysuria and strangury, and sometimes the appearance of blood and flocculi (_trumbos_?) in the urine. Gilbertus Anglicus Medicine of the Thirteenth Century

Whirling round rapidly in eddying flocculi, they quickly tailed away to the north, evaporating and disappearing. The Home of the Blizzard Being the Story of the Australasian Antarctic Expedition, 1911-1914

The flocculi, together with the posterior medullary velum and nodule, constitute the lobus noduli. IX. Neurology. 4a. The Hind-brain or Rhombencephalon

A little below the lateral angles, on a level with the striæ medullares, the ventricular cavity is prolonged outward in the form of two narrow lateral recesses, one on either side; these are situated between the inferior peduncles and the flocculi, and reach as far as the attachments of the glossopharyngeal and vagus nerves. IX. Neurology. 4a. The Hind-brain or Rhombencephalon

In the hind-brain the cerebellum is a mere band of tissue without lateral lobes or flocculi, and the medulla gives origin only to nerves four to ten; there is no eleventh nerve, and the hypoglossal is the first spinal -- from which it has been assumed that the rabbit's medulla equals that of the frog, plus a portion of the spinal cord incorporated with it. Text Book of Biology, Part 1: Vertebrata

The cerebellum (metencephalon) consists of a central mass, the vermis (v. cbm.), and it also has lateral lobes (l.l.), prolonged into flocculi (f. cbm.), which lastare - em-bedded in pits, [in] the periotic bone, and on that account render the extraction of the brain from the cranium far more difficult than it would otherwise be. Text Book of Biology, Part 1: Vertebrata

Take the head of a rabbit, the brain of which has been hardened by spirit, and carefully remove cranium; be particularly careful in picking away the periotic bone, on account of the flocculi of cerebellum. Text Book of Biology, Part 1: Vertebrata

There is always an abundance of fluid in the subarachnoid spaces, ventricles, and at the base of the brain, usually of the color of diabetic urine, and containing a limited number of flocculi, but in a few cases it was slightly blood tinged. Special Report on Diseases of the Horse

Opacity advances from the margin, over a part or whole of the cornea, but so long as it is transparent there may be seen the turbid, aqueous humor with or without flocculi, the dingy iris robbed of its clear, black aspect, the slightly clouded lens, and a greenish-yellow reflection from the depth of the eye. Special Report on Diseases of the Horse

From the fifth to the seventh day the flocculi precipitate in the lower part of the chamber, exposing more clearly the iris and lens, and absorption commences, so that the eye may be cleared up in ten or fifteen days. Special Report on Diseases of the Horse

Nouns that are often described by the adjective flocculi:
float 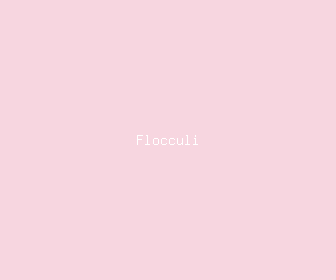 And as we let our own light shine, we unconsciously give other people permission to do the same. (Nelson Mandela )