To beat with a club; cudgel. transitive verb

To beat with a cudgel; cane.

To hit someone with a club. verb

To harshly criticize someone. verb

Strike with a cudgel verb

The trouble with most people is that they think with their hopes or fears or wishes rather than with their minds. [Will Durant]

The word "fustigate" in example sentences

"This is all very fine: but the simple fact is, it is beginning to rain, and I think it advisable for us to beat, fustigate, (where _did_ you get that, Miranda?) or wallop, a retreat!" The Merryweathers

The Demoiselle, keeping her carriage, is for Liberty indeed, as she has full well shewn; but then for Liberty with Respectability: whereupon these serpent-haired Extreme She-Patriots now do fasten on her, tatter her, shamefully fustigate her, in their shameful way; almost fling her into the Garden-ponds, had not help intervened. The French Revolution

Hai!” switching the camel, and fruitlessly endeavouring to fustigate Mas’ud’s nephew, who resolutely slept upon the water-bags. Personal Narrative of a Pilgrimage to Al-Madinah and Meccah

For the Patriot women take their hazel wands, and fustigate, amid laughter of bystanders, with alacrity: broad bottom of The French Revolution

We do not trouble ourselves to conduct our affairs in a diplomatic, reasoned fashion, we bloviate, fustigate, and bomb whoever makes us feel more “American” at the moment. Firedoglake » And In This Corner…Juan Cole 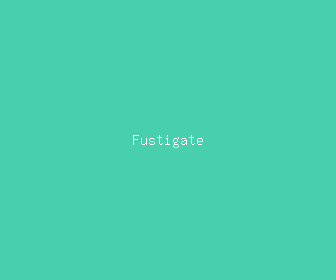 The human spirit must prevail over technology. Albert Einstein