Definitions and meanings of "Halliards"

What do we mean by halliards?

The word "halliards" in example sentences

But when the flagstaff stood there with the old paint all scraped off, and a new knob and halliards, the Captain could not help noticing it, and ordered some paint by telegraph. ❋ Unknown (2003)

Death to the Redoutable, he thought, and just then the French seamen released the Redoutable's main-yard halliards and the great spar dropped to crash onto the Victory's shattered hammock netting. ❋ Cornwell, Bernard, 1944- (2000)

The sun westered, casting the intricate shadow of shrouds and halliards and sails and masts on the green sea. ❋ Cornwell, Bernard, 1944- (2000)

Other men were reeving spare halliards and sheets so that heavy coils of rope were forever tumbling through the rigging to thump on the decks. ❋ Cornwell, Bernard, 1944- (2000)

The flames spread with extraordinary swiftness, engulfing the great spread of shot-punctured canvas, but Montmorin's men were just as swift, cutting the halliards that held the sail's spar and so dropping it to the deck where they risked the fire to hurl the burning sail over the side. ❋ Cornwell, Bernard, 1944- (2000)

The fore and aft derricks were huge glistening Christmas trees, festooned with thick-ribbed woolly halliards and stays, and the anchor chains on the fo'c's'le had been transformed into great fluffy ropes of the softest cotton wool. ❋ MacLean, Alistair (1984)

The boy danced between the halliards, hauling away number by number, the obscene black bags vibrating in the breeze as they jerked up and down. ❋ Cornwell, Bernard, 1944- (1981)

The boat-took released its hold and there was a moment of apparent disorder as the boat left the ship's side and four brawny arms at the halliards sent the balance-eug up the mast. ❋ Forester, C. S. (1962)

Then the boat swung round while the hands hauled at the halliards and the balance-eug rose up the mast. ❋ Forester, C. S. (1962)

The ship that rammed was swinging with the wind, her bowsprit tearing through shrouds and halliards until it snapped against the main-nast. ❋ Forester, C. S. (1962)

There were strings of bunting flying from the halliards of the Hibernia; with the shift of wind they could be read easily enough from the quarter-reck of the Hotspur. ❋ Forester, C. S. (1962)

He had a van, a centre, and a rear; he cruised in formation ready to meet the enemy, with rasping reprimands soaring up his signal halliards when any ship failed to keep station; he cleared for action and he turned by divisions into fighting line ahead; he tacked to double on the imaginary enemy's line. ❋ Forester, C. S. (1958)

It had been a strange little formality; all hands on board Crab had lined the rail, very properly, during the salute, and the officers had stood at attention on the quarterdeck, but 'all hands' amounted to very little with four men manning the saluting gun, and one at the signal halliards and one at the helm. ❋ Forester, C. S. (1958)

Two lengths of the main-topsail halliards; he had to keep his head clear to prevent his fumbling fingers from entangling them. ❋ Forester, C. S. (1958)

On deck one of the halliards was flapping merrily against the mast; through the planking of the hull I could hear the water tinkling along the topsides. ❋ Shute, Nevil, 1899-1960 (1951)

Forward, men hove in the cable until the anchor was underfoot; aft, men tailed on to the main halliards and sent the great mainsail aloft with a will. ❋ Aylward Edward Dingle (N/A) 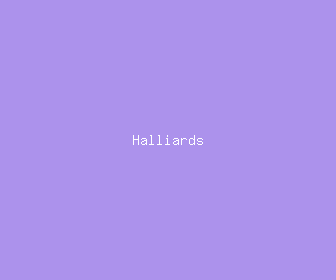 If you spend too much time thinking about a thing, you'll never get it done. Bruce Lee