Definitions and meanings of "Heartbrokenly"

What do we mean by heartbrokenly?

The word "heartbrokenly" in example sentences

A shout -- it was a hoarse, inarticulate cry; a swift, maddened scrutiny that searched the sodden scene of the ambush; then he was down beside the mare, calling her name heartbrokenly, his arms around her neck, his face against her warm, wet, velvet hide. ❋ Rex Ellingwood Beach (1913)

She winds up the chat some of the girls are sobbing heartbrokenly telling them they have to go home - but luckily they're actually already home, and the pipe and drape suddenly reveal that they're actually inside the model house. ❋ Holly Cara Price (2011)

Basically it told him he/she was "heartbrokenly sorry for his complaint" and could he please send another e-mail with details of the problem. ❋ Unknown (2008)

As Carter and Laney begin to see one another and the sex takes both over the top of the Bank of America building, as they enjoy their trysts and being together each wonders how it can end any way but heartbrokenly sad. ❋ Unknown (2009)

At that point, usually she'll scream a few times, throw something a few times, and then collapse in my arms sobbing heartbrokenly. ❋ Unknown (2007)

Straight away I started to cry and sob, and lift my hands to God and pour out how heartbrokenly sorry I was to have gone against him for all these months like this. ❋ Sheepdip (2004)

At which the poor thing began to cry, and so heartbrokenly that Mary was touched. ❋ Unknown (2003)

She cried continuously and heartbrokenly, each attack followed immediately by the next ❋ Anderson, Poul, 1926- (1981)

When the dawn broke we saw the smoke of a steamer, and agreed that it was her light we had seen; but I made nothing of that smoke, and was looking heartbrokenly at the mizzenmast and the cluster of drowned men washing about it, when a loud cry made me turn my head, and then I saw ❋ Thomas Stanley Treanor (N/A)

In an instant Gail had slipped her arms around her, and had drawn the brown head down on her shoulder, where for a moment the child sobbed heartbrokenly. ❋ Ruth Alberta Brown (N/A) 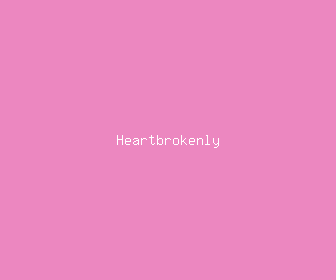 He that is giddy thinks the world turns round. William Shakespeare