A method of signaling between distant points by means of the heliograph. noun

The description and mapping of the surface of the sun. noun

The description of the sun. noun

The system, art, or practice of telegraphing, or signaling, with the heliograph. noun

An early photographic process invented by Nicéphore Niepce, and still used in photo-engraving. It consists essentially in exposing under a design or in a camera a polished metal plate coated with a preparation of asphalt, and subsequently treating the plate with a suitable solvent. The light renders insoluble those parts of the film which is strikes, and so a permanent image is formed, which can be etched upon the plate by the use of acid. noun

The scientific study of the sun noun

The art of making a heliograph noun

The system of signalling by heliograph noun

The word "Heliography" in example sentences

Adjectives that are often used to describe heliography:
physical

What does heliography mean? 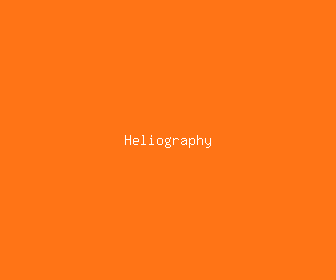 If you cannot do great things, do small things in a great way. (Napoleon Hill )