A wooden framework on a post, with holes for the head and hands, in which offenders were formerly locked to be exposed to public scorn as punishment. noun

To expose to ridicule and abuse. transitive verb

To put in a pillory as punishment. transitive verb

A frame of wood erected on a post or pole, with movable boards resembling those in the stocks, and holes through which were put the head and hands of an offender, who was thus exposed to public derision. noun

To punish by exposure in the pillory.

Hence Figuratively, to expose to ridicule, contempt, abuse, and the like.

To set in, or punish with, the pillory. transitive verb

A frame of adjustable boards erected on a post, and having holes through which the head and hands of an offender were thrust so as to be exposed in front of it. noun

A framework on a post, with holes for the hands and head, used as a means of punishment and humiliation. noun

To put in a pillory. verb

To subject to humiliation, scorn, ridicule or abuse. verb

The word "Pillory" in example sentences

What does pillory mean? 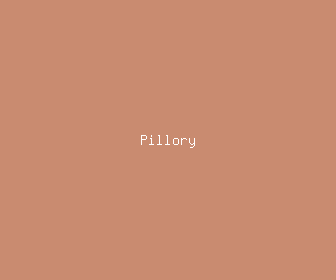 When you discover your mission, you will feel its demand. It will fill you with enthusiasm and a burning desire to get to work on it. (W. Clement Stone)