A consonant uttered with perceptible blowing, or expulsion of breath; an alphabetic sound in the utterance of which the organs are brought near together but not wholly closed; a rustling, or fricative, or continuable consonant. noun

A term used differently by different authorities; -- by some as equivalent to , -- that is, as including all the continuous consonants, except the nasals , , ; with the further exception, by others, of the liquids , , and the semivowels , ; by others limited to , , surd and sonant, and the sound of German , -- thus excluding the sibilants, as well as the nasals, liquids, and semivowels. See , §§ 197-208. noun

Of speech sounds produced by forcing air through a constricted passage (as `f', `s', `z', or `th' in both `thin' and `then') adjective

The word "Spirant" in example sentences

If we posit a voiceless spirant value for Uralic *x by this stage anyway, over in PFP the closest equivalent would be śexćim. Update of my "Diachrony of Pre-IE" document

If they do obtain their suit, which with such cost and solicitude they have sought, they are not so freed, their anxiety is anew to begin, for they are never satisfied, nihil aliud nisi imperium spirant, their thoughts, actions, endeavours are all for sovereignty and honour, like [1819] Lues Sforza that huffing Duke of Anatomy of Melancholy

Where z occurs the sound intended is that of English z. gh in the Black Speech and Orcish represents a ‘back spirant’ (related to g as dh to d); as in ghâsh and agh. The Lord of the Rings

In the rearrangement of the Angerthas the following principles are observable (evidently inspired by the Fëanorian system): (1) adding a stroke to a branch added ‘voice’; (2) reversing the certh indicated opening to a ‘spirant’; (3) placing the branch on both sides of the stem added voice and nasality. The Lord of the Rings

When the lips are not tightly closed the sound produced is not a stop, but a spirant like the Encyclopaedia Britannica, 11th Edition, Volume 3, Part 1, Slice 1 "Austria, Lower" to "Bacon"

In Late Latin there was a tendency to this spirant pronunciation which appears as early as the beginning of the 2nd century Encyclopaedia Britannica, 11th Edition, Volume 3, Part 1, Slice 1 "Austria, Lower" to "Bacon"

After Lat. i the v disappeared (rivus-um, Span. rio), but in most other cases it remained as a bilabial spirant euqal in balue to originally intervocalic b (novus-um, Span. nuevo). The Catholic Encyclopedia, Volume 14: Simony-Tournon

Between vowels b and g have usually been kept, the former as a bilabial spirant: in more popular treatment d has disappeared The Catholic Encyclopedia, Volume 14: Simony-Tournon

E. down to the fifteenth century, the initial b remained the stop or explosive (like English b) that it was in Latin, it has become in more recent times a bilabial spirant and as such is now co-equal with the Spanish v, which early gained this value both initially and medially. The Catholic Encyclopedia, Volume 14: Simony-Tournon

The d, too, initially, medially, and at the end of the word, has lost much of its explosive energy and become practically a spirant; in fact in the final position it is seldom heard in popular pronunciation. The Catholic Encyclopedia, Volume 14: Simony-Tournon

That the spirant J was in all cases pronounced as Y there is scarcely room for doubt. The History of Roman Literature From the earliest period to the death of Marcus Aurelius

They possessed the spirant F which they expressed by [Symbol] and used the symbol [Symbol] to denote V or W. The History of Roman Literature From the earliest period to the death of Marcus Aurelius

This has long been forgotten; but it is still said in Welsh, in North Wales, that a very rich man is a regular _clwch_, which is pronounced with the guttural spirant, which was then (in the 16th century) sounded in English, just as the English word _draught_ (of drink) is in Welsh _dracht_ pronounced nearly as if it were German. ' Life of Johnson, Volume 6 Addenda, index, dicta philosophi, etc. 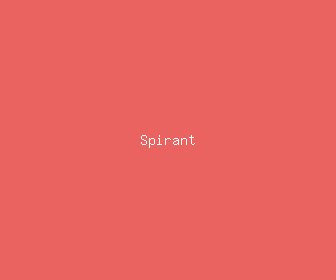 Always do your best. What you plant now, you will harvest later. (Og Mandino)