Pertaining to, or derived from, a sulphone; -- used specifically to designate any one of a series of acids (regarded as acid ethereal salts of sulphurous acid) obtained by the oxidation of the mercaptans, or by treating sulphuric acid with certain aromatic bases (as benzene). adjective

The word "Sulphonic" in example sentences

University and here he discovered the first hydrazine base, phenylhydrazine and demonstrated its relationship to hydrazobenzene and to a sulphonic acid described by Strecker and Emil Fischer - Biography

Berthelot has also investigated the action of ordinary concentrated sulphuric acid on acetylene, and obtained various sulphonic derivatives. Acetylene, the Principles of Its Generation and Use

The latter is acquired by compounds belonging to this class containing two or more sulphamino groups, or when they, in addition to one sulphamino group, contain a sulphoxy group and another sulphonic group. Synthetic Tannins

The sulphonic acid group may also be directly introduced either by concentrated, or by fuming sulphuric acid, or by elimination of halogen by the action of sodium or silver sulphite on the halogen derivatives of the aliphatic compounds. Synthetic Tannins

All natural tannins are unaffected by this treatment, ligninsulphonic and other sulphonic acids cause opalescence. Synthetic Tannins

The following analyses of the isolated lignin sulphonic acid are cited: Researches on Cellulose 1895-1900

The aromatic compounds form, as a rule, sulphonic acids with much greater facility. Synthetic Tannins

This partly neutralised sulphonic acid represents a white, pasty mass, which is not particularly easily soluble in water, yielding a solution of milky appearance. Synthetic Tannins

The free sulphonic acid, however, is the active principle in synthetic tannins, and since the latter always contain other acids (of organic and inorganic origin) devoid of tannoid character, a source of error is thus introduced, which we cannot eliminate by the present method of analysis. Synthetic Tannins

The author's application of the soda salt of the lignone sulphonic acid as a reducing agent in chrome-mordanting wool and woollen goods (D.R.P. 99,682) is more successful in practice, and its industrial development shows satisfactory progress. Researches on Cellulose 1895-1900

Like other "strong" and "weak" acids this sulphonic acid exercises a strongly swelling influence on pelt. Synthetic Tannins

This effect is still more pronounced when the absolute amount of free sulphonic acid is diminished. Synthetic Tannins

What does sulphonic mean? 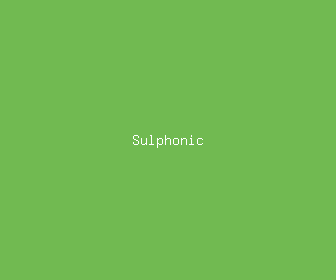