Definitions and meanings of "Trifurcate"

What do we mean by trifurcate?

Having three forks or branches. adjective

In botany, three-forked; divided into three branches or forks.

To divide into three parts.

To divide or fork into three channels or branches. verb

To divide or fork into three channels or branches.

The word "trifurcate" in example sentences

We trifurcate the experience and inflate each of the three aspect into something monumental - solid "me," solid ❋ Unknown (2001)

Thereby, the workpiece is fixed to the trifurcate with a light hammer blow. ❋ Gnter Hanisch (1993)

The workpiece is clamped between the trifurcate and the tailstock centre. ❋ Gnter Hanisch (1993)

This immature zygote holds it as the ultimate desideratum to consort with the dominate aborigine of the trifurcate variety. ❋ Heinlein, Robert A. (1952)

After having split into three pieces in 2007, Tyco says it will trifurcate its remaining businesses some time next year. ❋ DAVID MILSTEAD (2011)

The department decided to trifurcate the university to overcome the logistical problem of having too many colleges - about 600 - affiliated to the varsity, and also to ensure better management of its affairs. ❋ Unknown (2010)

That complete the group now proceed to bifurcate, trifurcate or quarter the items in disorder to create the defining boundary objects between the four major domains. ❋ Unknown (2010)

When that happens, that would be the moment for India to strike hard and trifurcate Pakistan. ❋ Unknown (2009)

This is the second letter she has sent to Dr. Singh in the last three days, in support of her demand to trifurcate Uttar Pradesh. ❋ Unknown (2009)

(trifurcate) is lightly struck with a hammer and chucked with the tailstock centre under medium pressure. ❋ Gnter Hanisch (1993)

In the third year the antlers are bifurcate; in the fourth year they grow trifurcate; and so they go on increasing in complexity until the creature is six years old: after this they grow their horns without any specific differentiation, so that you cannot by observation of them tell the animal’s age. ❋ Unknown (2002)

Adjectives that are often used to describe trifurcate:
paleae
lemmas

Nouns that are often described by the adjective trifurcate:
incision
appendage 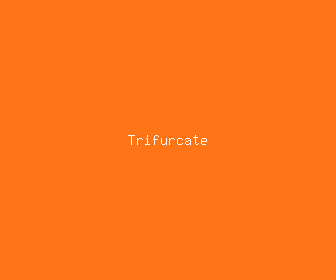 Don't compromise yourself. You are all you've got. Janis Joplin