a tablet in a Doric frieze with three vertical grooves alternating with metopes.

The word "triglyphs" in example sentences

Set off on the under side of the corona, vertically over the triglyphs and over the middle of the metopes, are the viae in straight lines and the guttae arranged in rows, six guttae broad and three deep. The Ten Books on Architecture

Again, if we are to suppose that there were open windows where the triglyphs now stand, it will follow, on the same principle, that the dentils of the The Ten Books on Architecture

Or, if dentils be carved in the cornice of the Doric entablature or triglyphs represented in the Ionic entablature over the cushion-shaped capitals of the columns, the effect will be spoilt by the transfer of the peculiarities of the one order of building to the other, the usage in each class having been fixed long ago. The Ten Books on Architecture

Page 8 Dörpfeld (XV, p. 424) says that the Persians left the walls of the temple and the outer portico standing; that this is evident from the present condition of the architraves, triglyphs and cornices, which are built into the Acropolis wall. The American Journal of Archaeology, 1893-1

In grand and minor proportions, in the disposition of triglyphs in the frieze, in mouldings and general sentiment, he perceived a remarkable freedom from the restraints of his school, -- a freedom which, so far from detracting from the grandeur of the architecture, gave to it a degree of life and refinement which his appreciative eye now sought for in vain among the approved models of the Academy. The Atlantic Monthly, Volume 08, No. 45, July, 1861

The huge city was deeply Greek, with compressed, wide-bellied red Doric columns where we were accustomed to taller, straighter, grayer travertine in the Ionic or Corinthian mode, and with austere metopes and triglyphs below plain friezes where we would expect elaborate statuary. Two For The Lions

And they stood at the entrance, marvelling at the king's courts and the wide gates and columns which rose in ordered lines round the walls; and high up on the palace a coping of stone rested on brazen triglyphs. The Argonautica

It seems, at least, rather extravagant to take them carefully away and then restore the temple without a peristyle, for the restored building would probably need at least cornices if not triglyphs or architraves; then why not repair the old ones? The American Journal of Archaeology, 1893-1

Above the architrave, the triglyphs and metopes are to be placed: the triglyphs one and one half modules high, and one module wide in front. The Ten Books on Architecture

At the centre, vertically under the gable, there should be room for three triglyphs and three metopes, in order that the centre intercolumniation, by its greater width, may give ample room for people to enter the temple, and may lend an imposing effect to the view of the statues of the gods. The Ten Books on Architecture

Thus, over each portion of the architrave two metopes and two triglyphs [3] will be placed; and, in addition, at the corners half a triglyph and besides a space large enough for a half triglyph. The Ten Books on Architecture

The Doric order is characterised by squat columns with round capitals and a frieze decorated with alternating triglyphs (three vertical bands separated by grooves) and plain or sculpted metopes (rectangular blocks). Renaissance architecture: how to identify the Roman orders

It was possible to protect wooden columns, architraves and triglyphs from the weather by means of a wide cornice. The American Journal of Archaeology, 1893-1

The triglyphs having been thus arranged, let the metopes between the triglyphs be as high as they are wide, while at the outer corners there should be semimetopes inserted, with the width of half a module. The Ten Books on Architecture

Over the capitals of the triglyphs the corona is to be placed, with a projection of two thirds of a module, and having a Doric cymatium at the bottom and another at the top. The Ten Books on Architecture

But observe the eaves [of the roof, [22]] where there is an empty space between the triglyphs in which you may let yourself down. The Tragedies of Euripides, Volume I.

Where is my aged father? let him come near; and where is my son Pentheus? let him take and raise the ascent of a wattled ladder against the house, that he may fasten to the triglyphs this head of the lion which I am present having caught. The Tragedies of Euripides, Volume I.

The spaces left (due to the fact that the metopes are broader than the triglyphs) may be left unornamented or may have thunderbolts carved on them. The Ten Books on Architecture

And they stood at the entrance, marvelling at the king's courts and the wide gates and columns which rose in ordered lines round the walls; and high up on the palace a coping of stone rested on brazen triglyphs. The Argonautica

The guttae, extending as wide as the triglyphs and beneath the taenia, should hang down for one sixth of a module, including their regula. The Ten Books on Architecture

What does triglyphs mean? 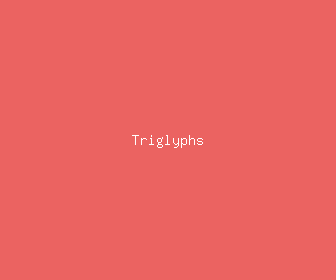 The meaning I picked, the one that changed my life: Overcome fear, behold wonder. Richard Bach