Resembling winter; characteristic of or appropriate to winter; wintry; cold and bleak; cheerless.

Of or relating to winter. adjective

The word "Winterly" in example sentences

Your note, I can scarcely tell why, hurt me, and produced a kind of winterly smile, which diffuses a beam of despondent tranquillity over the features. Mary Wollstonecraft

Your note -- I can scarcely tell why, hurt me -- and produced a kind of winterly smile, which diffuses a beam of despondent tranquillity over the features. Posthumous Works of the Author of A Vindication of the Rights of Woman

"Zimowe Gody" means as much as winterly mating season ... if I corectly translate the meanig in english (I use to read good books in english to improve my language skills). Brian Ruckley - News & Views

After the winter solstice, and at the time when the zephyr usually begins to blow, severe winterly storms out of season, with much northerly wind, snow, continued and copious rains; the sky tempestuous and clouded; these things were protracted, and did not remit until the equinox. Of The Epidemics

But long after the solstice, and near the equinox, much wintery weather out of season; and when now close to the equinox, northerly, and winterly weather for no long time. Of The Epidemics

The wind was slowly veering toward the east, as the Grimsby man had predicted, with no sign of any storm as yet, but rather a prospect of winterly weather, and a breeze to bring the woodcocks in. Mary Anerley

January was drawing to its close; the weather was growing more and more winterly; high winds, piercingly cold, were raving through our narrow streets; and still the spirit of social festivity bade defiance to the storms which sang through our ancient forests. The Lock and Key Library Classic Mystery and Detective Stories: Old Time English

Their place had been filled by a tangle of many saplings, and in their midst rose an elder-bush, already showing leaf, amid the bare winterly wood. The Testing of Diana Mallory

The wind was slowly veering toward the east, as the Grimsby man had predicted, with no sign of any storm as yet, but rather a prospect of winterly weather, and a breeze to bring the woodcocks in. Mary Anerley : a Yorkshire Tale

However it might be possible to give Count de Grasse an early hint of it in case you agree with him upon the winterly departure of the whole fleet for the West Indies. Memoirs Correspondence and Manuscripts of General Lafayette

He did not wish that his grandson should remain with him, but he was resolute not to leave his old grandfather, and the rest considered it alike proper and necessary; and the two, therefore, were hastily supplied with whatever they might require in this winterly solitude. Strife and Peace

I know his love for his native land, and know that this winterly nature which I dread so much, is precisely his life and his health. Strife and Peace

It was an autumn day, but one of those autumn days when a sun warm as summer and a crystally pure air cause the earth to stand forth in the brightest splendour before the azure-blue eyes of heaven; when Nature resembles a novice, who adorns herself the most at the moment that she is about to take the nun's veil, and to descend into her winterly grave. Strife and Peace

The country in general had a winterly appearance; and the grass round the camp was dry, but I observed the fine grass of the Isaacs, and many varieties which grow on the Suttor and Burdekin, which will yield an excellent feed in the proper season; and, even at the present, neither our bullocks nor horses were starving. Journal of an Overland Expedition in Australia : from Moreton Bay to Port Essington, a distance of upwards of 3000 miles, during the years 1844-1845

The ground was covered with snow, and the weather most winterly, when we embarked in our open boats to cross the lake for the The Substance of a Journal During a Residence at the Red River Colony, British North America and Frequent Excursions Among the North-West American Indians, In the Years 1820, 1821, 1822, 1823. 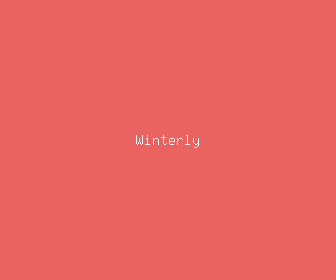 I am a part of all that I have met. (Alfred Tennyson)