An obsolete variant of . noun

The word "Wough" in example sentences

The trapper shouted and waved his cap; whereupon, to his amazement, the bear uttered a loud "wough" and charged straight down on him -- only to fall a victim to misplaced boldness. Hunting the Grisly and Other Sketches

The old dog reached it, and stood straining upon the spring, when Lincoln fired, and the hound, with a short "wough", dropped in upon his head, and was carried off like a flash. The Rifle Rangers

Anyway it's wough going but I know it'll be worth it in the end. j-gan Diary Entry

As it scrambled swiftly over the edge it caught sight of the elephant and with a deep "wough!" charged straight at it. The Jungle Girl

` It says "Bough-wough!" cried a Daisy: ` that's why its branches are called boughs! ' Through the Looking Glass

"I call that vewy wough," said Braintree, looking and feeling a little uncomfortable. Parkhurst Boys And Other Stories of School Life

"Hope it's not wough outside," said Braintree, as the boat, now nearly out of the creek, began to dance a little at the prospect of meeting the open sea. Parkhurst Boys And Other Stories of School Life

And that was seene verament, for he wrought them both wo and wough. A Bundle of Ballads

He had a great objection to the letter _r_, which he considered "wough and wasping." Character Sketches of Romance, Fiction and the Drama, Vol. 1 A Revised American Edition of the Reader's Handbook

I exclaimed, in a rage, — as if it were the most natural thing in the world for me to be in one; and as I spoke, I raised my piece; when “Bow — wow — wough!” went my old dog Bull, who had not bitten Sheppard Lee

And when I cannot subdue it, there is Harietta for the flesh -- wough! but she sickens me -- even for that! " The Price of Things

Adjectives that are often used to describe wough:
bough

What does wough mean?

What does the word wough mean? Find synonyms, antonyms and the meaning of the word wough in our free online dictionary! Find words starting with wough and anagrams of wough. 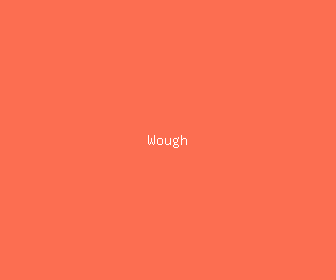 Make the most of yourself, for that is all there is of you. (Ralph Emerson)